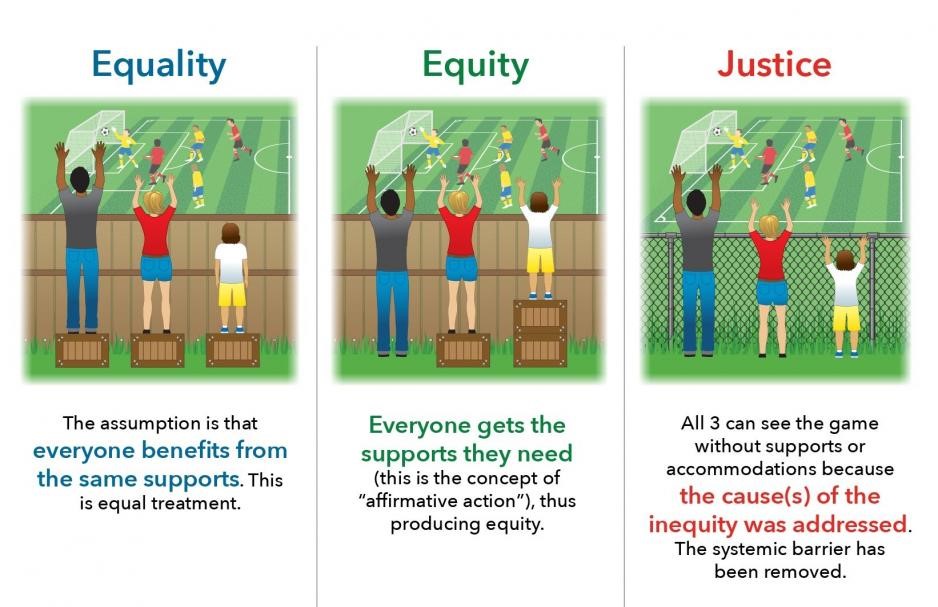 When working in the education field, it is important to have an understanding of anti-oppressive language. These terms, along with the title of “social justice warrior”, are often used as misconstrued buzzwords in media, and come with many layers of negative connotations. 2020 was a year where many political and societal issues were brought into attention, so it may be useful for educators and students to understand this terminology. Let’s take some time to unpack this!

Why is developing anti-oppressive terminology important? Certain groups within our societies hold power over others, creating dominant and marginalized groups. For example, the demographic of Canadian corporate leaders are statistically populated by white heterosexual males, while women and black individuals are highly unrepresented. While this may not seem problematic (just hire the best person for the job and everything will be fine!), it leads to three big pitfalls:

It is worth mentioning that policing language, rather than sharing knowledge and growing together to understand how to become more inclusive in society, is the goal of anti-oppressive education. Relearning is a process, and one that should come from a place of loving compassion. Anti-oppressive language is a tool for growth, rather than a weapon to be used to attack others, which ultimately, is the purpose of the list below.

Ableism: prejudice or discrimination in favor of able-bodied people

Ageism: prejudice or discrimination on the basis of a person’s age

Classism: prejudice or discrimination against or in favor of people belonging to a particular social class

Feminism: the advocacy of women’s rights on the grounds of political, social, and economic equality to men

Heterosexism: prejudice or discrimination against homosexuals on the assumption that heterosexuality is the normal sexual orientation

Imperialism: extending the rule or authority of an empire or nation over foreign countries

Racism: Prejudice or discrimination directed against someone of a different race based on the belief that one’s own race is superior

Sexism: prejudice or discrimination based on a person’s sex or gender

Ally: people who recognize the unearned privilege they receive from society’s patterns of injustice and take responsibility for changing these patterns

Bias: a tendency to believe that some people, ideas, etc. are better than others; usually resulting in treating someone unfairly

Binary thinking: a grouped way of thinking about related terms

Colour Blind: an ideology that suggests that the best way achieve equality is to treat individuals as equally as possible

Cultural appropriation: the adoption or use of elements of one culture by members of another culture

Culture: a way of life of a group of people; the behaviors, beliefs, values, and symbols that they accept, generally without thinking about them, and that are passed along by communication and imitation from one generation to the next

Discrimination: an action or a decision that treats a person or a group negatively for reasons such as their race, age or disability

Diversity: moving beyond simple tolerance to embracing and celebrating the rich dimensions of diversity contained within each individual

Dominant culture: a culture that is the most powerful, widespread, or influential within a social or political entity in which multiple cultures are present

Equality: ensuring individuals or groups of individuals are treated fairly and equally and no less favourably, specific to their needs, including areas of race, gender, disability, religion or belief, sexual orientation and age

Equity: simply refers to the concept of fairness

Gender: the concept of behaving in a masculine of feminine manor (gender does not equal sex)

Homophobia: the dislike or prejudice of homosexual people

Ideology: a collection of beliefs held by an individual, group or society

Majority: those who hold the positions of power in society

Minority: are defined by the majority and are generally based on one or more observable characteristics, including ethnicity, race, gender, sexuality, religion, age, and able-bodiedness

Multiculturalism: the sense of an equal celebration of racial, religious and cultural backgrounds

Oppression: The social act of placing restrictions on an individual, group, or institution

Power: the ability to influence or outright control the behavior of people

Prejudice: prejudgment, or forming an opinion before becoming aware of the relevant facts of a case

Privilege: Privilege is a special right or advantage available only to a particular person or group of people

Race: a socially constructed way of classifying humans based on shared physical characteristics

Stereotype: a widely held and oversimplified image or idea of a particular type of person or thing

Systemic racism: a form of racism expressed in the practice of social and political institutions, as distinct from racism by individuals or informal social groups

White privilege: a term for societal privileges that benefit people identified as white in western countries, beyond what is commonly experienced by non-white people under the same social, political, or economic circumstances

All blog content is written on behalf of SUTIL Executive Member, Samantha Kitzul, and does not necessarily reflect the views of SUTIL as a whole, nor the post-secondary institutions SUTIL is comprised of.